Middleton in Teesdale is the main centre for Upper Teesdale and grew up largely as a result of the lead mining industry. The Quaker-owned London Lead Company established its headquarters for northern England here in 1815 and erected many buildings, including its offices at Middleton House, workers homes, a school and a chapel. Piped water was available at convenient points and you can still see the tap housings in walls. Each house had, and still has, its own vegetable garden with the company’s most deserving employees having the largest houses in the area of New Town, a model housing estate.

The handsome, cast iron fountain in the centre of the village was built in 1875 following a collection by employees of the London Lead Company for the retirement of the company’s superintendent, Robert Bainbridge. An interesting feature of St. Mary’s Church is its detached belfry, little altered since it was built in 1557. A large part of Middleton has been designated a Conservation Area in order to protect its character and a number of buildings have been sympathetically restored using traditional slates, stone and sash windows.

This walk will take about an hour to complete, there are no stiles or gates . The footpath alongside the bank of the River Tees is uneven. Download a PDF of the Village Walk Guide.

Start the walk from the Bainbridge Fountain (1) where the roads from Alston (the Market Place). Barnard Castle (the Cattle Market) and Brough (Bridge Street) meet. Although this hints at an agricultural history the London Lead Company set up its headquarters here in 1815 and, with its Quaker ethics, created a boom town. In 1857 nine out of ten people in the area were connected with the lead mining industry. The cast iron Bainbridge Fountain serves as a memorial to the Company: in 1877 employees subscribed to a collection for Robert Bainbridge, the Company’s Superintendent. The £262 15s 5d collected would be worth several thousand pounds today. Back across the road are the War Memorial and the Wesleyan Chapel (2).

Walk up Hill Terrace (3) towards The Green. These solid and unpretentious houses symbolise late-Victorian prosperity. Just after you reach the Garage descend to the main road and continue along the footpath. This area is dominated by the Co-op (4) and two Methodist Chapels. 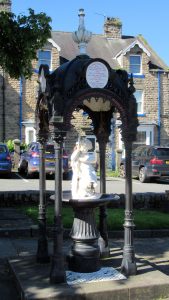 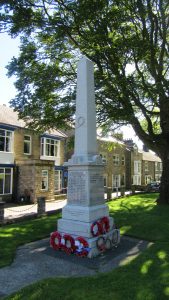 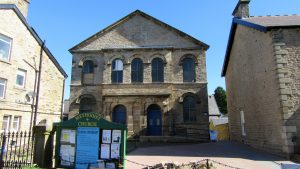 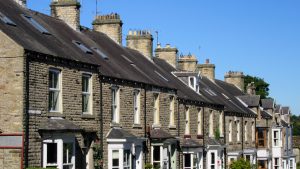 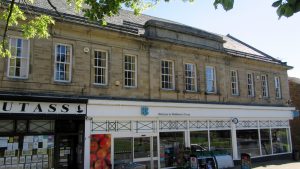 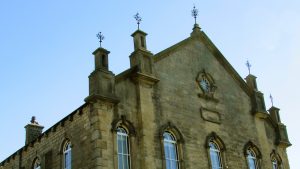 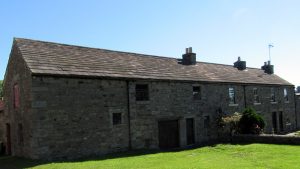 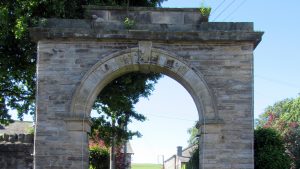 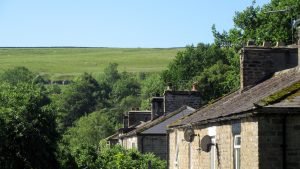 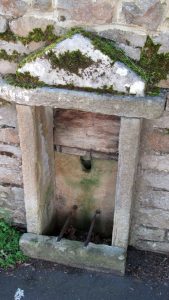 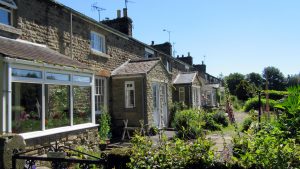 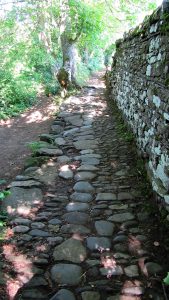 The first is now the home of the Pathway. The former Primitive Methodist Chapel (5), a listed building was closed in 1974. Beyond it is a traditional dales’ farmstead, house, barn and cow byre all in a row.

Turn right and pass under the arch (6) in Masterman Place into Newtown (7). It was fitted with iron gates to form an impressive entrance. Arches are a distinctive feature of Middleton, there are 30 arches on the route – see how many you can spot. Only the most deserving employees were housed here and you pass the old Library. The larger houses were for managers, surveyors and a doctor. River Terrace (8) was for the lowlier families, but they had to be hard working and sober.

“The first occupiers took possession of their new abodes in May 1824 accompanied by bands of music. The rent of each cottage and garden is £4 per annum”.

Piped water was available at convenient points. The tap housings can still be seen in the walls. Each house had its own vegetable garden; some had a purpose-built pig sty at the back door. Local poet Richard Watson was born in one of these cottages in 1833 and returned, although to a different house, where he died in 1891.

Turn right along the river bank.(9) The cobbled surface of the path was worn down by lead miners on their way to work. Until 1974 the River Tees was the administrative boundary between Durham and Yorkshire and the bridge across it is called the County Bridge (10). The Auction Mart is the scene of regular cattle sales and in particular sheep sales. Follow the path over the road on the Middleton side of the river and cross the Hudeshope Beck then turn right. At the top of the incline take in the view of Kirkcarrion, an ancient burial mound topped with pines.

Where the path meets the Alston road there is another tap housing in the wall on your left. Behind this wall was the Company School (11), built in 1861. Workers’ children attended for a fee of a shilling per quarter. Turn back towards the village, on your right you will see the former Blacksmith’s Shop, with its cobbled forecourt. At the bridge turn left and go up the steep incline of the Hude to view Middleton House (12). This was the superintendent’s house from 1815, until 1905 when operations ceased here.

Retracing your steps, on the right is the former Baptist Chapel opened in 1827. It incorporated a reading room for Company employees (there was another in Newtown). The building next to the chapel was once the police “lockup”. Cross the bridge back towards the village centre. Beyond a monkey puzzle tree is the former corn mill. The race, which led water to the mill wheel, is still traceable. Turn left up the steps on Seed Hill. On market days, seed and grain were sold here. Next to the steps is the stump of the Market Cross. The remains of the stocks are still attached to its base. 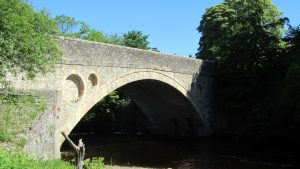 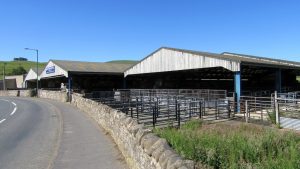 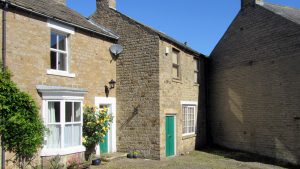 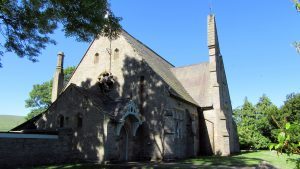 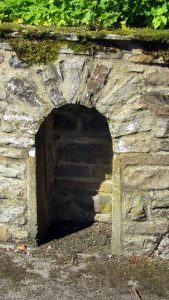 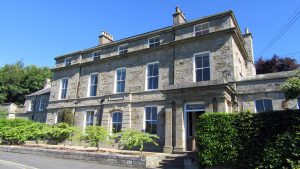 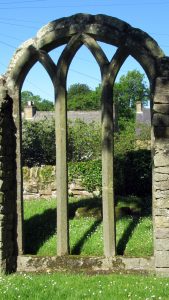 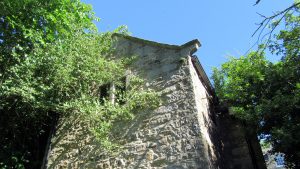 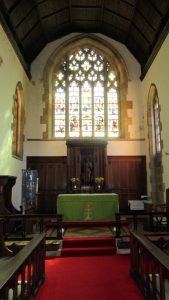 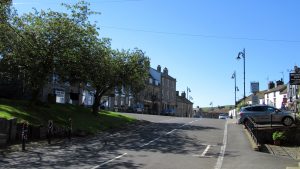 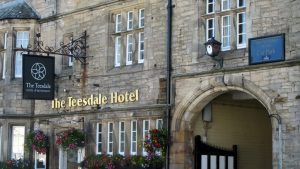 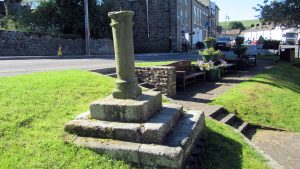 Cross the road to the churchyard (13). The east window of the 13th century church stands amongst gravestones which pre-date the present church built in 1878. To the left there is the only detached Belfry in Durham, it is complete and has hardly altered since it was built in 1557.

Leave the churchyard and turn left into the Market Place (14). Around the Market Place most buildings date from before the lead bonanza. The Teesdale Hotel, an exception, was built to impress and stands out from its neighbours. It served tourists who flocked to Middleton on rail excursions. A 1916 guidebook proclaimed:

“To those who have been unnerved by Air Raids, it offers a safe retreat out of all danger, where a rest amid the beauties of Teesdale will gradually build up the body”

The building opposite with the large windows, was built with Company support as the Mechanics’ Institute, it became the Town Hall and in 1911, the Raby Estates Office. Returning to the War Memorial you will have completed a short walk around one of the Northern Pennine’s hidden gems. 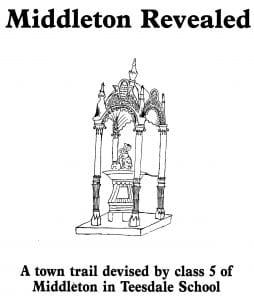 In 1968 the children of Class 5 at Middleton Primary School produced a town trail leaflet called  Middleton Revealed. Download a copy in PDF format. 50 years has seen changes in the use of some buildings, others continue being used for the same purpose.

Another guide, 3 Circular Walks also describes walking around the town. Download a copy in PDF format to see what changes have taken place in the last 25 years. 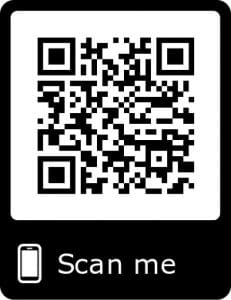